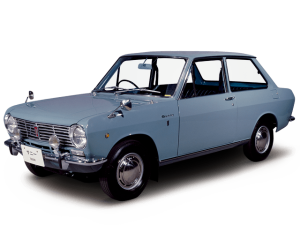 The B10 Sunny was a very quaint and stylish little car, many of the styling features and crisp lines were reminiscent of Nissan’s CSP311 Silvia coupe, which had gone on sale the year before.

The car featured very large windscreens for a car of its size, which when combined with its delicate and thin roof pillars, gave the car a light and airy look. The inside of the car was fairly basic, though reasonably well presented.

The lower section of the dashboard was painted the same colour as the body, and on top of that was a black padded dash top.

The first model Sunny B10 had a grille that featured seven horizontal bars and three vertical bars. The grille had a tall and narrow shield shaped emblem in the middle with a D in the centre. The tail lights on this model are a rectangular shape situated horizontally. The layout of the tail light has a stop light, then a reversing light and then an indicator.

The second version of the B10 Sunny came out in 1968. Everything on this car was pretty much the same as the 1966 model except for its grille. The grille on this model has four wide horizontal bars, each with two thin horizontal bars between them. It also had 19 vertical bars. There is a wide and short shield shaped emblem in the middle of the grille. In countries where it was sold as a Sunny there is an S in the emblem, in countries where it was sold as a 1000 it has a D. The second version uses the same taillights as the 1966 model.

True to its founders’ principles of local production, Datsun begins manufacturing for local markets before expanding around the world including countries such as Thailand, Taiwan, South Africa, Mexico and Australia.