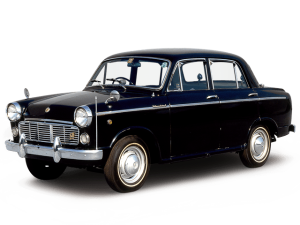 August 1959 the Datsun Bluebird 310 series becomes available in Japan’s dealership, the Nissan Bluebird Store. An iconic model which sets new world standards for Japanese sales, from fleets to private ownership. A car that would become the backbone of the Datsun range for decades to come.

Just like the previous Datsun 124 truck the new Datsun 125 was essentially the same as the Datsun 221 except for it’s engine and grille. The 125 was fitted with a rather old-fashioned side valve engine, which was the 860cc B-1 series engine. The previous 124 truck was fitted with the D-10 engine. The D-10 and the B-1 were essentially the same engine, they were both the same size at 860cc, the only difference being that the new B-1 had a compression ratio of 6.7:1 while the D-10 was 6.5:1. The B-1

The body of the Datsun 125 is pretty much the same as the 1958 Datsun 124. It uses the same grille and front panel as the 124, which was a pressed steel grille with six slots that sat inside the grille opening with about an inch of clearance between the grille and the opening. The badges are all the same as the 124, with a Datsun badge just above the grille, and a Datsun badge on the side of the vehicle. The only significant difference between the 124 and the 125 is that the 124 had small front indicators either side of the grille and also had the bullet shaped indicators mounted to the top of the front guards, the 125 instead had no bullet indicators but instead had larger front indicators.