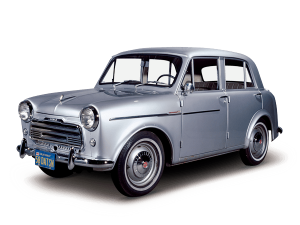 Datsun 1957 – A start of technology revolution at its best. The Datsun 1000 (also known as the Datsun 210) is launched. Nissan hires American engineer Donald Stone who made several modifications to the Austin Engine. Featuring new technology, substantial performance and reliability gains over the Austin design.

Another feature which is incorporated is the round badge centred on the dashboard, which says, ‘DATSUN 1000’. The Datsun 1000 is also known as the “Isha-no” car in Japan (or Doctor’s car) as they are commonly seen driven by Doctors when making house calls.

Inerestingly when the Datsun 210 first went into production in October 1957 it used the same indicator/flasher system as the previous 113, which consisted of a double ended bullet shaped indicator assembly that sat on the top of the front guard/fender, as seen in the photo above. It had no indicators at the front of the car, or at the back, the rear of the car had only two stop lights.

In response to feedback from the Americans, after trialing the car in the USA, the indicator system was changed in early 1958. The top mounted ‘bullets’ were removed and indicators were fitted to the front of the car, either side of the grille, and also at the back of the car just above the stop lights.

The Datsun 210 is used as an action vehicle for a short scene in the movie “Hiroshima mon amour”.