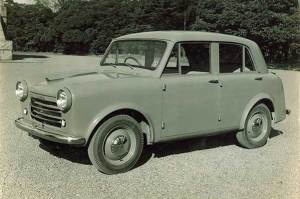 Datsun 1955 – January 1955 the Datsun 110 went into production. This was the first all new passenger car that was produced after the War.

The 110 was the first car in a line of vehicles that would eventually evolve into the Datsun Bluebird, a car that would become the backbone of the Datsun range for decades to come. The basic architecture of the 110 would continue in production, with a few minor changes, until July 1959, by which time it had evolved into the Datsun 211.

Styling was fairly modern for it’s time, especially when compared to the previous DB models. There are certainly styling cues taken from Austins of the era, but with enough details to give it a distinctly Japanese character. It’s giant 15 inch wheels, sitting inside it’s completely open wheelarches, give the car a very upright appearance.

The dashboard in the 110 featured an instrument cluster that was rather inconveniently located in the centre of the dash, on the following 112 model the instruments were relocated to be in front of the driver.

The engine may have been old, but the chassis and suspension were all new and designed especially for the new car. It featured a reverse Elliot I beam front and a solid rear axle with longitudinal leaf springs front and back. Electrics were all 6 volt.

It is also a new era to the popular and economical Datsun (Nissan) pick-up truck, which is first produced in Japan.