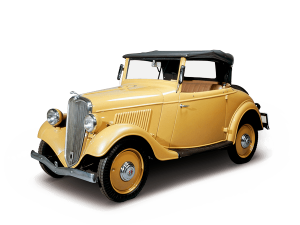 Datsun 1935- Around this time saw the start of the start of Nissan Motor’s mass production plant in Yokohama Plant, in April 1935. The Datsun Model 14 – the first small size passenger vehicle, rolls off the assembly line.
Datsun cars symbolized Japan’s rapid advances in modern industrialization, and throughout the world, which has a profound effect on the Japanese economy.

Datsun 14 Model or DAT 14 Model as it was still known at the time in as an honour to the original company investor’s surnames (Den, Aoyama and Takeuchi) had an interesting mascot atop the radiator of the Model 14. DAT translated into hare, or fast rabbit in Japanese and in an effort to honour this associated the 14 Model had a beautifully sculpted leaping rabbit on its bonnet. Unfortunately this unique feature was only see on the Datsun 14.

The Datsun 14 Model replaced the 13 Model and was fairly similar, however was differentiated by different mechanicals. Featuring a new Type 7 engine, which was a side valve 4-cylinder engine with a 722cc displacement. Slightly smaller than the older engine in the Model 13, it was 15 horsepower more powerful.

Nissan built a new factory in Yokahama in 1934, and all the old Graham Paige equipment was installed in the new factory. This huge investment gave Nissan the largest and most modern factory in Japan, and the basis on which to expand and grow. The new factory came online in 1935, in time for the start of production of the Datsun 14. This marked the first time that the bodies and chassis were all built in the same factory, rather than having them built by subcontractors.