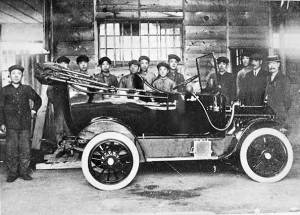 The first vehicle built for the streets of Japan ever launched by Kwaishinsha which is named the “DAT-Car” wins the bronze prize at the Taisho Esposition in Tokyo.

DAT was formed in 1912 by Mr. Den, Aoyama and Takeuchi, who named their creation after their initials. The DAT 41 was built by the Kwaishinsha Motor Car Works, which changed its name in 1925 to DAT Automobile Works Ltd. It had a 2300cc 20hp 4cyl engine.

The three investors form the company name which means “Lightning fast”. DAT represents the company’s guiding principles of durable, attractive and trustworthy. It was just a small workshop with 6 employees, but the founders had big dreams and even planned to start exporting cars in the future

A little more history of the Taisho Exposition of 1914. “The most spectacular of spectacles, and the most ambiguous regarding the relationship of the subject to consumption and the tension between state and mass-produced consumer culture, were the expositions that were organised in the name of industry and nationhood.

The well advertsied and highly organised Tokyo Taisho Exposition featured booths staffed by geisha (solicited from throughout the city), the nation’s first escalator, such new commodities as the gas bathtub and stove…” – Japan in the World