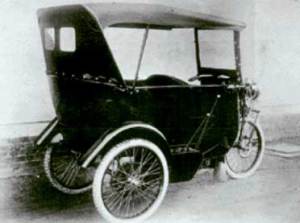 The Gorham was designed by an American aircraft designer living in Japan, William R. Gorham. After a lack of success trying to build aircraft in Japan he designed this three wheeler. It was built by the Jitsuyo Jidosha Seizo company. It had a 880cc 7.2hp 2cyl engine. The prototype was built in 1918, production began in 1920.

The second Gorham was a four wheeler. It was built in 1922 and 1923. It continued to use the 880cc 7.2hp 2cyl engine used in the three wheeler. Its features included a rigid front axle, tiller steering and brakes on the rear wheels only. The car’s name was later changed to Lila.

A little more history around Datsun 1919. The DAT corporation had been selling full size cars to Japanese consumers under the DAT name since 1914 but in 1930 the Japanese government created a ministerial ordinance that allowed cars with engines up to 500 cc to be driven without a license. DAT Automobile Manufacturing began development of a line of 495 cc cars to sell in this new market segment, calling the new small cars “Datson” – meaning “Son of DAT”. The name was changed to “Datsun” two years later in 1933.