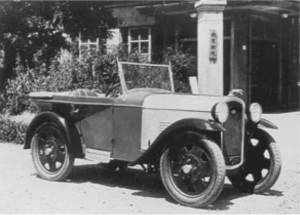 Invention turns another key as DAT Jidosha Seizo becomes affiliated with the Tobata Foundry Company. The new owner Yoshisuke Aikawa designs a new lightweight and economical car – his vision power “Mobility for all”. Engineered locally and mass produced, DAT takes on its new name as, “DAT-son” (the son of DAT), which is later changed to “Datsun”.

Around this time the DAT 91 prototype was completed in 1929, and was deemed to be a success, and in 1930 the production version went into production as the Datson 10. The car was designed by a DAT engineer called Takayoshi Gotou. The car was a fairly conventional design for it’s time, and was powered by a 4 cylinder side valve DAT engine with a displacement of 495cc. It produced 10hp at 3700rpm, but it moved along well due to the fact it only weighed 400kg.

The DAT 91 prototype featured a polished alloy bonnet, which was painted on the production Datson 10. The 91 also sported a leaping greyhound radiator emblem that was purchased from Lincoln in the USA. This didn’t make it onto the production version. The 91 had huge chariot wheels with six massive spokes, the 10 had much more attractive smaller wheels with eight slots. Because the 10 had smaller wheels it also had smaller front guards, that were much lower. As a result the headlights were mounted lower as well. The Radiator grille on the 91 and the 10 is completely vertical. It has a chrome surround and the corrugated insert top and bottom is painted the same colour as the body. The 10 has no badge on the radiator, the later Datsun 11 has a Datsun badge on the top corrugated section. The 91 has a DAT badge under the corrugated top section. The body on the Datson 10 is all but identical to the one on the Datsun 11, the only major difference being that the bonnet vents on the 10 and the 91 are horizontal, while the ones on the Datsun 11 are vertical.

The Datson 10 was not a success at first, with only ten being sold in it’s first year in 1930. Figures aren’t available for 1931, but production increased significantly. It wasn’t until the Datsun 11 was released that sales really took off.