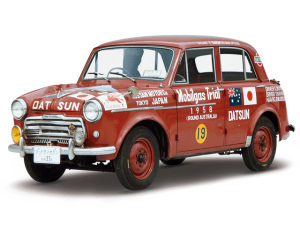 The Datsun 210 is the first Japanese car to have motorsport success in the international arena.

Two Datsun 210’s are entered into the toughest endurance rally, The Mobilgas Trial”, a 16250 kilometre track around Australia.

Both the Datsun 210’s make the finishing line. With the “Fuji-Go” (the red car) coming first in its class. The results are endless as the Datsun’s performance and reliability reputation is recognised across the world. A Landmark vehicle in Nissan’s history.

If Nissan were upset when their first sports car, the 1952 Datsun DC-3, accounted for a total of only 50 ever built, then they must have been totally dismayed when their next car, the Datsun S211 sold only a total of 20. But while the S211 may have been a sales disaster, more importantly it represented the first step in a line of sports cars that would sell in increasingly larger numbers and eventually lead to the Z car series, which would become the biggest selling sports car in the world in the 1970s.

The Datsun S211 prototype, called the A80X, made it’s world debut in the rather unlikely location of the rooftop of the Nihonbashi Mitsukoshi 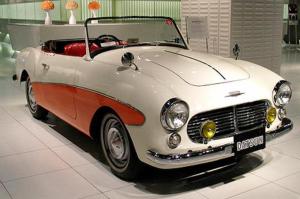 department store in Tokyo on the 10th of January 1958, during a special Datsun display at the store. The display was due to go for three days, but the number of visitors was so great it was continued for a whole week. The production version went on sale on the 4th of June 1959.

The car was designed by Yuichi Ohta, who was the son of Hiro Ohta, who founded the Ohta car company in Japan. Yuichi Ohta had previously designed the Datsun DC-3 and the DW-4 Wagonette. Obviously inspired by the Austin Healey, Ohta came up with a design that could best be described as an ‘orientalised’ Big Healey. The coloured flash along the side of the car and the front section had an obvious Healey 3000 feel, but the rear section looked more like a shorted version of a Kaiser Darrin.

The Datsun S211 has the odd distinction of being the only Nissan product ever to have a fibreglass body. The fibreglass re-inforced plastic resin bodies were made by the Tonouchi Industrial Company in Yokahama, with the materials supplied by the Nitto Chemical Company.

Like the previous Datsun DC-3 sports car, the S211 was based on the mechanicals and chassis of another vehicle, in this case it was the Datsun 211 sedan. The S211 sat on the same chassis as the 211 sedan, and used the same engine, but the S211 had a 4 speed floor change gearbox instead of the 3 speed column change in the sedan. The only other notable mechanical difference was that the sports car sat on 14 inch wheels instead of the sedan’s 15 inch wheels.